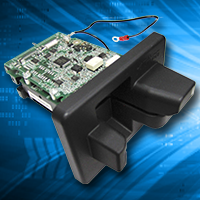 Magnetic Field Interference in which a jamming signal is emitted to disrupt a detected skimmer’s reading of a magnetic stripe.

Encryption at Magnetic Head – Magnetic stripes are encrypted at the very first point at which they are read, defending against a skimmer inside the ATM’s cabinet.

Encryption of EMV Chip Card APDU – Data exchanged with an EMV chip card is encrypted on the card reader’s cable, defending against a skimmer inside the ATM’s cabinet.